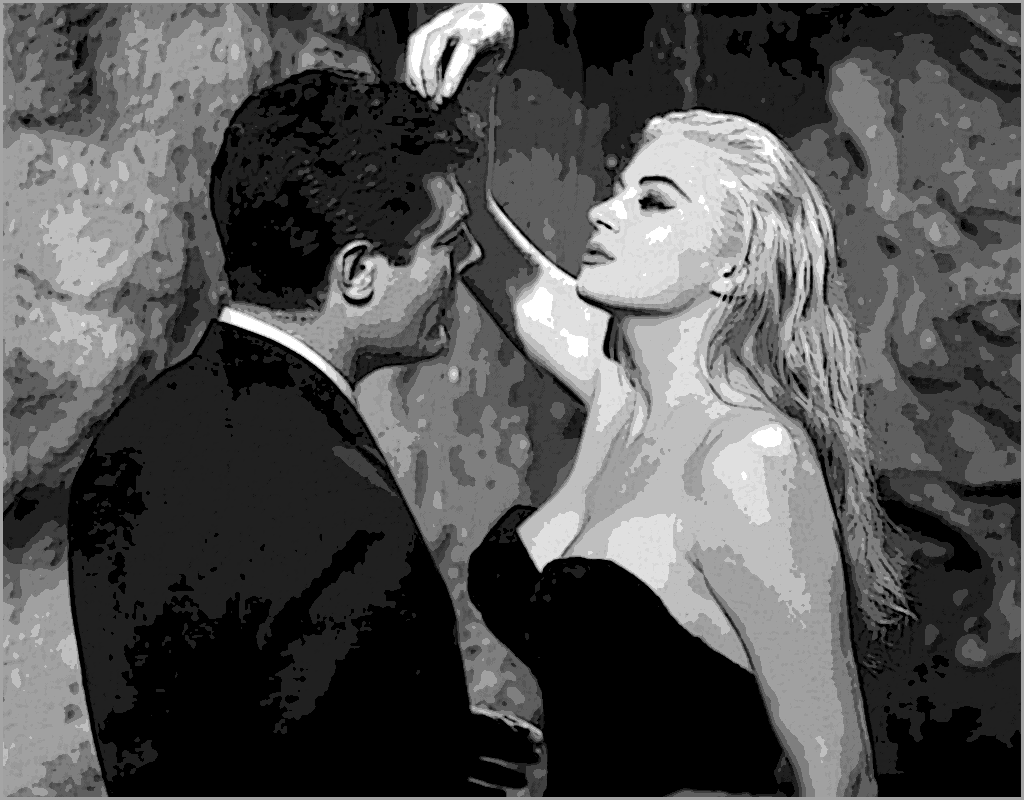 I think I love this film so much because I identify with its main character, Marcello Rubini (played by Marcello Mastroianni). For a short period in my life, I was a sort of Marcello. I lived my life at night, in seemingly exciting places, among the seemingly beautiful and interesting people. Each night began with the promise of excitement, adventure, and opportunity only to fade into the hard reality of the morning light.

La Dolce Vita, literally translated into English means “The Sweet Life.” But the movie’s enigmatic title is more a question than a statement. The main character, Marcello, lives his life at night patrolling Via Veneto, Rome’s famous street of hip night clubs in the late fifty’s and early sixty’s. Marcello writes for a tabloid magazine and is caught in a revolving door, night after night, chasing the next big story, following the party trail, “hobnobbing” with Rome’s “big shots.” He aspires to hearth, home, and serious, artistic work, but is continually “pulled” back into the hedonistic and seductive nightlife of Rome’s jet-set. To outsiders, Marcello’s life seems ideal. It literally seems like “The Sweet Life,” but Marcello secretly knows this is not true. His profound loneliness and chronic dissatisfied with his empty existence are obvious. Consider the scene in the café by the sea with the idyllic young girl or his admiration of Steiner at his salon party. Marcello wants to be respectable and solid but is not ready to “turn his back” on the excitement and uncertain adventure of Rome’s nightlife.

Interestingly, the film was made in 1959, the year I was born. It’s a great “period piece.” It’s interesting to see what the world was like in “beatnik” 1959 Rome. La Dolce Vita also introduced the world to the word “paparazzi.” (after Marcello’s sidekick, Paparazo (which interestingly means mosquito in Italian).

The film is filled with great symbolism. The opening scene, in particular, is one of my favorites. Marcello, chasing a symbol of Christ (chasing virtue) but is distracted by the girls on the roof (sin, hedonism). I also love the scenes with the blond actress Sylvia, especially the classic scene in Rome’s Trevi Fountain. To me, Sylvia represents every woman, and all of life’s pleasures, so seductive, so alluring, teasingly close, yet unattainable. Notice how she keeps Marcello (and every man) off balance throughout her scenes. Notice how she reaches into the fountain and “drips” water (the symbol of life) on Marcello’s head just before his dream of attaining her is abruptly shattered by the sunrise. But by far, my favorite scene is the last scene of the film. The young girl symbolizing stability, beauty, marriage, and virtue, calls out to Marcello from across a small tributary running to the sea. But because of the roar from the wind and waves, Marcello literately cannot hear her. He is unready to “cross the river” and join her on “the other side.” He doesn’t yet truly understand who she is or the value of her offer. Then, he is once again literally pulled back into his hedonistic group of friends and lifestyle.

The film is long, and admittedly, an acquired taste – like a good espresso. As much as I love foreign film, It took me two or three settings to get through it the first time. Then, after listening to the English commentary, I became infatuated with it. I finally “got it,” and couldn’t quit watching it. Each time I watch it, even now, I see something else in the edges.

But, I caution you, don’t expect women to understand this film. My wife initially had a visceral aversion to it. Even after I explained in detail why it’s not a lifestyle mature men aspire to, but a trap many young men fall into, she still has trouble with it. It’s definitely a mans movie. It speaks to man’s instinct to “chase” and man’s love of adventure – maybe this night will be different, maybe the next woman I meet will be more beautiful than the last, maybe this party will be truly exciting, maybe this lover will offer the satisfaction I’m looking for. Especially with regard to relationships, many men, especially young men, would much rather live in “empty uncertainty,” than “settle down” to a stable life. Consider how the issue reaches a climax during Marcello’s street lit, argument with his beautiful and loving girlfriend, Emma. Marcello sees Emma’s unconditional love and devotion to him as a trap. He equates any acceptance of her offer to losing his manhood and becoming a “worm.” He sees Emma’s unconditional love as a “brutalization.”

The movie’s uncertain ending is perfect. It’s not a conclusion and is not meant to be. This confuses many moviegoers accustom to a nice, neat Hollywood ending. The purpose of the movie, to me, is to communicate the loneliness and emptiness of a lifestyle that to outsiders seems ideal. It’s a movie that conveys a “feeling” that the viewer either identifies with and understands or does not.

Give it a chance and I know you eventually love it. I think Roger Ebert said it best when he wrote: “There may be no such thing as the sweet life. But it is necessary to find that out for yourself.”