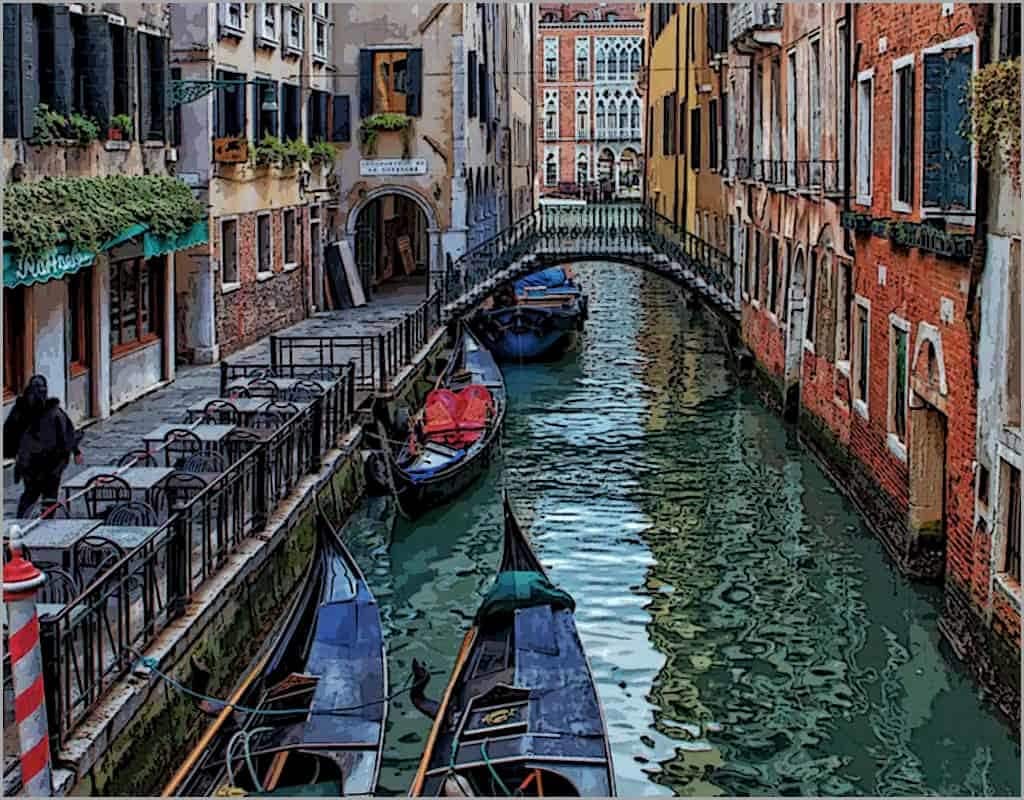 A light drizzle spit as I emerged from my hotel room at 6:30 PM, not heavy enough to worry about as walking close to the storefront overhangs seemed to provide enough shelter to stay reasonably dry. The darkening October sky was gray, but the precipitation seemed intermittent. I’ve never been an “umbrella guy,” preferring instead to utilize whatever cover naturally exists and travel light.

My room was situated in a modest, but clean hotel situated about two hundred yards East of the main train station. I rarely reserve rooms in advance and this trip was no exception. I prefer to arrive with only a backpack, look around a little, then stay in a place that looks nice. On this particular trip, I arrived at Marco Polo early and took a water taxi to Piazza San Marco. Locals informed me that my best chance to find inexpensive lodging was to walk Northeast to toward the train station. As most of the hotels close to San Marco tend to be expensive and booked, I took the advice and had no trouble finding a nice three-star room on the North end of the island. On my way North, I stopped frequently to relax and take in the sights. I joined a group of young people drinking “Bombs” (a mixture of sweet red vermouth, Campari, sugar, and God knows what), on the north side of the Rialto Bridge then meandered through the alleyways toward the train station.

By the time I booked my room, it was past three o’clock and after traveling all night and walking all day, I was beat. I decided to take a shower and rest until dinner. The shower in my room was so small, I had to open the door slightly to bend over to pick up the soap. The width of my bed took up the whole room save about eighteen inches – just enough for your legs when sitting on the edge. After showering, I laid down and was out in minutes. I woke at about a quarter to six and dressed for the evening.

Interestingly, many Venetian hotel operators won’t allow you to keep your room key when you leave the premises. So before setting out for the night, I had to check my key at the hotel desk. To prevent you from “accidentally” taking the key with you, this particular operator attached a ridiculous, gigantic tassel to the ring, large enough to prevent you from even placing the key in your pocket. As I handed my key to the man at the desk, I informed him that I may be late and asked if he would be around to return the key to me so I could enter my room. He said he would; so with that, I set out for a night in Venice.

Walking close to the old buildings to take advantage of any overhead cover, I headed toward the Rialto. My head was still unclear from my nap. “God, I thought, I need a drink.” About a hundred meters from my hotel I spotted a group of people milling around in front of a bacaris (wine bar). The great thing about staying in Venice overnight is that after about six o’clock, most of the tourists vacate the island, leaving only the hotel dwellers and locals. After a long day of dealing with the tourists, many locals head for the bacaris for a “happy hour” drink and light meal. At bacaris, as long as you buy a drink (I recommend the red house wine – usually a good bet), you could eat all the free (and delicious) finger foods you wanted and visit with real Venetians. This particular bacaris was overflowing with Italian speaking locals. I ordered a red wine to clear my head and rejuvenate.

After a couple of red wines, I made my way back through the tight Venetian streets toward the Rialto Bridge. I remembered a quaint little bar just past the bridge and I was determined to find it at some point that evening to determine what went on there after dark.

As darkness came, a light rain began to fall and I walked close to the sides of the narrow streets so as to take advantage of any overhead cover. I found the little bar on a side alley, just past the Rialto Bridge. A warm light poured through the window and into the cobblestone alley. As I approached, I could see that the joint was bustling.

I made my way to the bar and asked for a “vino rosso.” As I settled in, I realized the two guys on my left were stone masons from Ireland and consequently spoke a familiar dialect. I learned that they were temporally working in the city and making the most of their expense accounts. They were getting “pissed” in the British sense of the word and encouraging me to do the same. On my right was seated a distinguished looking gentleman. As it turned out, he was a German Congressmen with more than a few interesting stories to tell.

After visiting with the stone masons, the congressmen, and a couple of Delta Stewardesses seated behind me for a couple hours, I left the tiny bar and walked again out into the dark Venetian street and headed for my room. The light rain was still falling and as I gazed at the old bridges, stone buildings, and quiet canals, I couldn’t help feeling like I was on a movie set or had somehow traveled back in time. In my inebriated state, I was sure Shylock would step out from a dark alcove and demand a pound of my red wine impregnated flesh.

The next day, I think I walked every foot of the islands. Around every corner was something interesting. At one point, I simply sat in a quiet tiny square surrounding by buildings and tried to imagine the days when filled buckets of water from the well in the center of the piazza. It was a great visit.

Venice to me represents the possibilities of capitalism. In it’s day, Venice was among the most beautiful, most cultured, wealthiest, most educated, and most cosmopolitan cities in the world… and it’s built on a swamp. The city rose from a desolate boggy lagoon during one of the most depressing periods of world history (the middle ages) to a powerful, world-class opulent city-state because of mercantilism.

Amazingly, it wasn’t built by a monarch as a monument to himself as most pre-Renaissance cities often were. No, Venezia, for the most part, was built by working class people, smugglers, pirates, traders, sailors, merchants, bankers, and businessmen that worked hard, took risks, and got rich. Common people greedily working to further their own self-interest and in the process creating a phenomenon that would enrich and enlighten the world.

Venice also reminds me of the close relationship between art and business. Without the riches produced by the Venetian merchants, that place would probably still be a desolate bog. For the better or worse, art and commerce are locked in a perpetual wrestling match for the hearts and minds of the masses. Artists sell ideas, businessmen sell products. Artists are concerned with the conceptual, the ideal, the possible, businessmen are interested in the practical, the deliverable, the measurable. Artists work for love and vindication, businessmen work for profit. Businessmen give you what you want, Artists give you what they believe you should have.