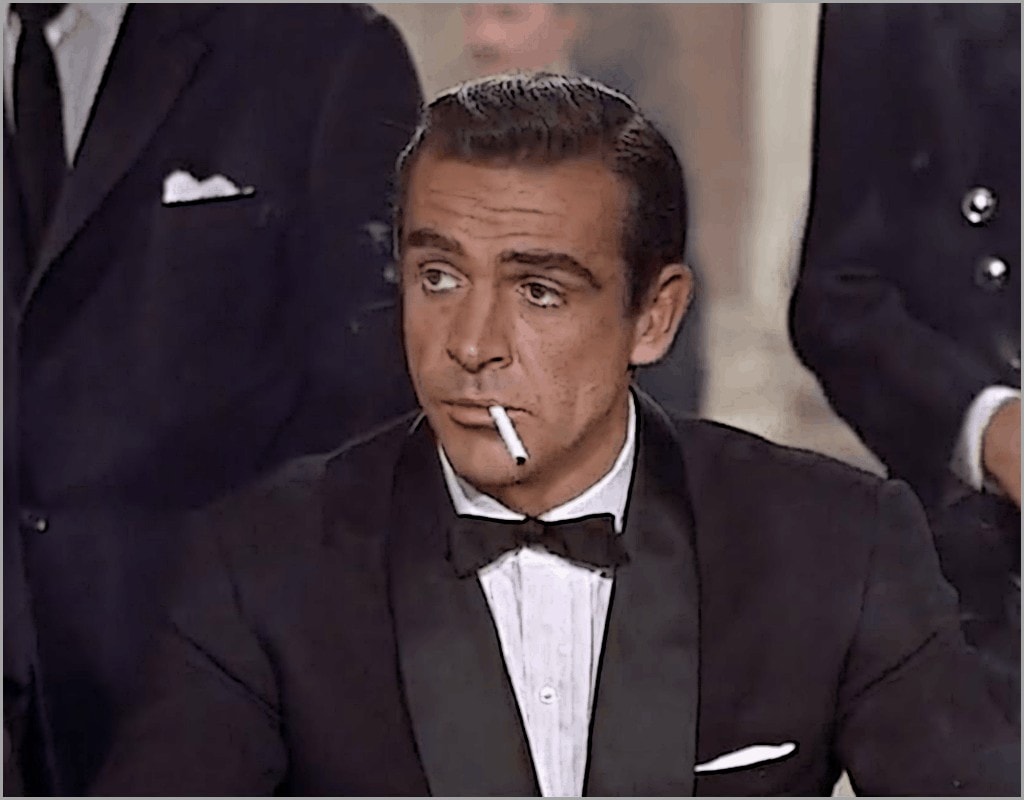 In 1973, two events caused me an epiphany. The first occurred one afternoon when my Mother bought home the complete set of Ian Fleming’s James Bond novels. She had purchased them from a local library used book sale. With casual curiosity, I helped her line them up in sequence on our family room bookshelf. I was thirteen at the time and hadn’t given James Bond much thought. I knew of James Bond through a few branded lunch boxes I had seen and a plastic toy gun/rifle/briefcase set that a friend of mine received at Christmas a few years earlier.

At the time, our TV reception was poor. The signal came via an antenna stuck into a dirt pile behind house. We received just three mainstream channels – CBS, NBC, and if you turned the antenna just right, a very snowy ABC. As Bond movies seemed to always run on ABC, my exposure to the few Sean Connery Bond films, available for viewing at the time, was limited to a few very snowy minutes of Dr. No and Thunderball. For the most part, I was Bond ignorant.

The second event occurred a couple of weeks later. While perusing a bin of discounted record albums at our local drug store, I came across the soundtrack for the first Roger Moore Bond film, Live and Let Die. The movie-poster-like album cover looked very cool. It was modern and a departure from the snowy glimpses of the Sean Connery films I had seen. The title song was written and performed by Paul McCartney, a former Beatle. This was also a departure from the Shirley Bassey covers performed on earlier Bond films. The album was discounted to $3.99. So I decided to take a chance and buy it.

Arriving home, I immediately unwrapped the album and placed it on the turntable. It only took a few minutes of listening to McCartney’s title track to completely hook me. I carefully examined the liner notes and noticed they contained images from the film including those of a young Rodger Moore and a young and sexy Jane Seymour. Images of Tarot Cards, voodoo, the Caribbean, Harlem, and the French Quarter of New Orleans also intrigued me. I was hooked. I had to know more about Bond.

Watching the movies was out of the question for reasons previously mentioned. There was no HBO, Netflix, or Blockbuster in the early 1970s. But there were those books my Mother bought. The album hadn’t completely finished when I started to finger the first of the thin, black, Ian Fleming novels which I had lined up so neatly a few weeks before. I carefully pulled number one, Casino Royale, from the shelf and began to read.

Casino Royale was a real departure from anything I had read before. It was detailed, action-packed, violent, sexy, and very adult. This was no Hardy Boys Adventure story and Bond was no Fenton Hardy. What initially impressed me was the mood. The books take place, for the most part, in the 1950s post World War II era. The mood is dark and very serious. The West is immersed in the “Cold War” with the Soviet Union. “Spying” is depicted as extremely dangerous and very serious business. But what really interested me was the Bond character. There was a disconnect between the few snowy minutes of the “wisecracking” and seemingly invincible Sean Connery I had seen on TV, and the guy in this book. This guy was darker and more serious. He drank heavily, he took drugs, he got beat up a lot, he got hurt, but most of all he was lonely. Bond lived “the high life” on the company credit card, but he paid a very high price.

As I read through the series a picture of Bond became more complete. Of course, he had lots of women. But his relationships were short by necessity, for the most part, sex only. He was tender with women, but for obvious reasons, he didn’t “open up” or get close. He was also a perennial “outsider” with regard to the British. Bond is not English. While his origins are unclear, his father was believed to be from Scotland, his mother from Switzerland. He was orphaned at the age of eleven when his parents die in a mountain climbing accident. Because of his Scottish heritage and his sometimes unorthodox methods, and in spite of his apparent success as a spy, the British elite that ran MI6 never seem to warm to him. He therefor is constantly trying to “prove” himself. His origins are that of a commoner, not of the ”high society” he secretly yearns for. He compensates by striving to know all things with regard to culture, fashion, and taste, often upstaging his British masters. This characteristic is played off in the movies for comic relief, as he frequently educates those around him. His insecurity is never indicated or revealed.

The “Book Bond” is no superhero. He’s a flawed and damaged man prone to heavy drinking, chain-smoking, sexual indulgences, and gambling. He gets hurt a lot and several of his stories end with him in the hospital. In fighting situations, he seldom “overpowers” his adversaries as much as he “outsmarts” them, using common objects as weapons or devising tactical maneuvers that lead to a winning combination.

One by one I finished every Fleming book in the series. A couple of years later, we retired the antenna and subscribed to cable TV. Suddenly all the Bond movies I had been missing were available for the watching, without copious amounts of “snow.” One by one I watched each available Bond movie up to and including The Man With the Golden Gun.

At first, I was elated just to have my new hero come to life. But I soon realized that to appeal to a broader audience, the producers had “sold out” to some extent and made the “Movie Bond” a much more “lovable” character. This became a “splinter in my mind.” Why had they changed him when the books were so good? Over the years, as one Bond movie after another was released with the same formula, and the same departure from the “Book Bond,” a personal resentment began to grow. Ian Fleming’s Bond was getting lost and no one seemed to care. The gloom of the Cold War was being replaced with comic relief, gratuitous action, car chases, and explosions. Action scenes were becoming more and more outlandish and superhuman. The character was becoming a shallow, shadow of his “Book Self.”

What was I to do but continue to suffer through each sequential movie? Of course, I had to see them, even after the movie plots departed entirely from anything Ian Fleming ever imagined. Movie titles weren’t even books anymore. The studios were resorting to using Fleming’s short stories as main movie titles with no plot similarity save the character names. It was like someone painted a frown on the Mona Lisa and no one seemed to notice.

Then one day while sitting in a theater watching coming attraction trailers, something wonderful happened. A trailer for a new Bond film began to run and it was in “black and white!” My heart raced. Was this the Ian Fleming “Book Bond” coming to the big screen for the first time? As the trailer continued, my excitement intensified as a chiseled Daniel Craig stared down an apparent villain with steely cold and ruthless eyes. Wow! This was it. Finally, the public was ready for the real Bond.

As the movie’s release date approached, my excitement grew. I told everyone I knew that this Bond “looked” different. This time there would be no “campy jokes” or superhero antics. This was going to be the “real” Bond, the serious Bond, the “Book Bond.”

Well, needless to say, you can imagine my abject disappointment when a few short minutes into the “new” Casino Royale, Daniel Craig suddenly morphed into color and participated in the standard Bond “chase” opening, jumping from buildings and cranes. I felt violated. This was bullshit. Although I felt Daniel Craig was the closest Bond to the book character, the movie was a retread of the same old “superhero” formula. Where was SMERSH? Who were these African guys with all this cash? Why was M a woman for Christ sake? And Texas Holdem’, Seriously? Don’t these people know Bond plays baccarat and smokes cigarettes?

I write this in the aftermath of the latest Bond film, Skyfall. Of course, I saw it. My wife has a thing for Daniel Craig. Doesn’t every woman? It wasn’t a bad film, it just wasn’t a “Book Bond” film. Although I must admit, I enjoyed the film, I continue to be disappointed that the Bond character departs from the books.

If Barbara Broccoli or Michael G. Wilson the producers of the current Bond movies are reading, please consider the following suggestions.