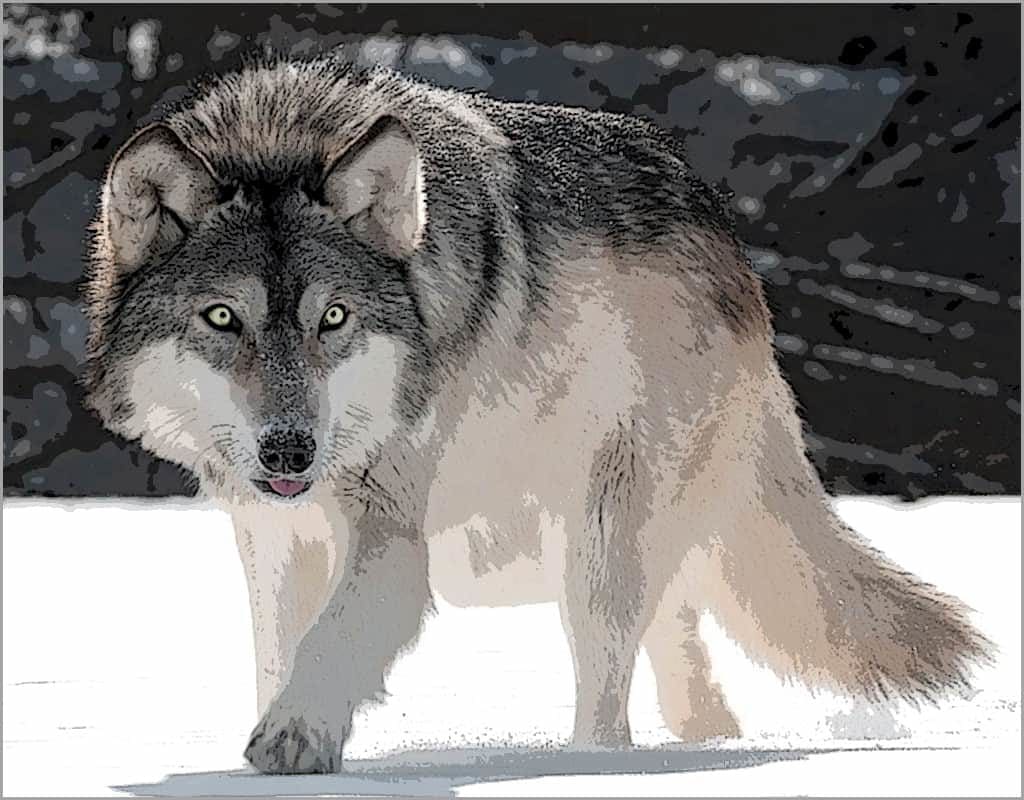 “History is written by the winners.”

The domestic dog is an extremely close relative of the gray wolf, differing from it by at most 0.2% of mtDNA sequence (1). That’s 2/10 of one percent. They are so close genetically that they can easily breed with each other to produce offspring. Yet behaviorally, dogs and wolfs are extremely different. Dogs can be trained, wolves cannot. A wolf cannot choose to be a dog, it simply has a different set of survival skills. Wolves survive the elements of nature on there own, dogs have become parasites on humans.

I realized this after viewing an excellent PBS documentary entitled “Dogs Decoded” (4). In the documentary, scientists tried everything to train and socialize wolves, including sleeping with them from birth, raising them with domestic dogs, and executing extensive training regiments. No matter what they tried, at about 6 weeks of age, profound differences began to surface. The wolves were ultimately “untrainable” and had to be returned to the wild.

Now, think about this. With the exception of identical twins, no two people, are genetically identical. Human to human total genetic variation is estimated to be between 0.1% – 0.5% (2). A 2006 article in the BBC suggests that as geneticists examine the human genome more closely with respect to the so-called “copy number variation (CNV),” genetic variation in humans, even humans of the same race, could be as high as an astonishing 12%. Quoting the BBC: “It would seem the assumption that the DNA of any two humans is 99.9% similar in content and identity no longer holds.”(3)

Now if a .2% variation makes a wolf a dog, what does a .2% genetic variation between humans produce? Humans, that are untrainable?

I ran across another interesting essay regarding genetics in the book: “13 Things That Don’t Make Sense: The Most Baffling Scientific Mysteries of Our Time” by Michael Brooks (5). Chapter 11 is entitled: Free Will – Your decisions are not your own. Brooks sites several interesting studies and blocks of scientific evidence that suggest no matter what we do, our tendencies are genetically encoded and the concept of free will is an illusion.

Quoting Physics.org: “When biologist Anthony Cashmore claims that the concept of free will is an illusion, he’s not breaking any new ground. At least as far back as the ancient Greeks, people have wondered how humans seem to have the ability to make their own personal decisions in a manner lacking any causal component other than their desire to “will” something. But Cashmore, Professor of Biology at the University of Pennsylvania, says that many biologists today still cling to the idea of free will, and reject the idea that we are simply conscious machines, completely controlled by a combination of our chemistry and external environmental forces.” (6)

These are things we don’t like to think about. We like the idea that we have free will and we can control our lives and the outcomes of our endeavors. The idea that our future is “predetermined” is a little unsettling. From the movie the Matrix:

MORPHEUS: Do you believe in fate, Neo?

NEO: Because I don’t like the idea that I’m not in control of my life.

MORPHEUS: I know exactly what you mean. (7)

But the evidence seems to suggest that we do live in a “Matrix.” Not a matrix of machines and computers feeding us the dreams of our reality, but rather a literal matrix of books and manuscripts telling us that we can fundamentally change our future, when, in fact, our genetic tendencies work like gravity, pulling us back to a predetermined course of fate.

The author Robert Ringer pointed out in his best selling book “Winning Through Intimidation” (8), that successful people seldom realize the cause of their success. They (successful people) write books that extoll the virtues of “hard work, sacrifice, and persistence.” But in my experience, many successful people I’ve had the pleasure of observing, don’t seem to work hard at all – or at least any harder than the average guy.

Our society goes through pendulum swings that reward certain traits and skills at particular times in history. At present, specialists in medicine, math, and the sciences seem to do quite well. But think about the days of the first pioneers to this continent. In those days, generalists with a broad knowledge of survival, carpentry, and farming, seemed to be the best able to survive and therefore the most successful.

I’ve read a lot of books on success. The one thing I can say with certainty is that no book on success I have ever read, ever stated that the success of the author was pure serendipity – a lucky accident.

Can you imagine any author stating …

“Well, I was just naturally good with numbers. I could calculate the answers to complex problems in my head well before my classmate could figure it out using calculators, paper, and pencils. I don’t know why, but numbers just made sense to me. I easily scored A’s in all my technical classes and armed with the credentials the university provided me, I drifted into a job that many people consider difficult, but it just came easily to me because the required skill set aligned perfectly with my natural, God-given talents.”

To test my hypotheses, I like to play a game I call “extrapolating to extremes.” Here’s how it goes. If I assume that humans can control their future and therefore determine their fate, I pick an extreme example and check to see if it seems logical. For example, with enough determination, knowledge, and work, could I become a successful NBA center, jockey, great operatic tenor, tax account, IRS Agent, or President of the United States?

The answer to all the above is a resounding NO. I don’t have the genetic attributes to be any of those things no matter how hard I tried. I’m not big enough to be a center, small enough to be a jockey or have the voice to be a tenor. I don’t have the disposition to spend my days staring at sheets of numbers – so IRS agent and tax account are out of the question, and I don’t have the political disposition necessary to run for public office. If my genetics don’t match these occupations, might there be other occupations that just don’t fit me – certainly?

So why fight it. Why go through life believing you can change from a wolf to a dog? Why not follow the course that suits you – the course that feels right – the course you’re genetically predetermined to follow? If society deems your course to be worthy of financial success, so be it. If not, know that the pendulum is always swinging. Your time may come – hopefully you’ll still be alive when it arrives. But even if it doesn’t, surrender to what is. Wrap the “is-ness” of life around you like a blanket and rest in the peace it provides. Know that you may not be a multi-million dollar NFL quarterback, but you have just as much gray matter in your head as the next guy. Who knows what genetic abilities you possess but take for granted – abilities and insights that others can’t even imagine?