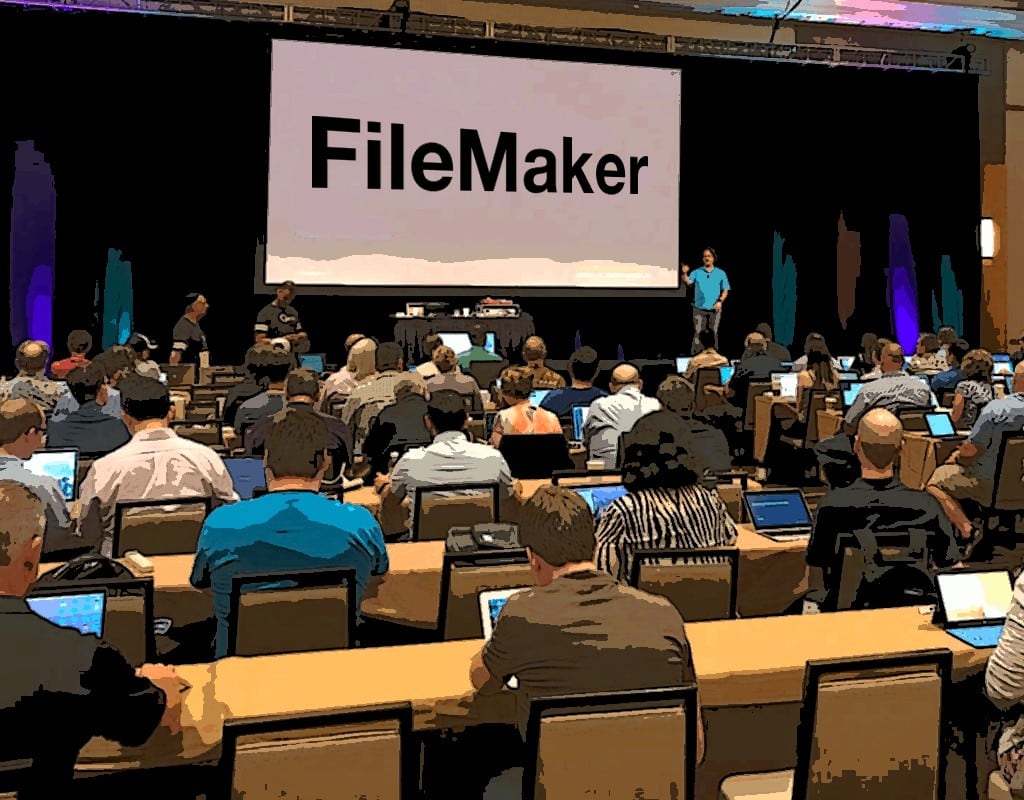 I just attended the FileMaker Developers Conference 2016, and it was an odd event indeed. To understand this statement, it’s necessary to understand a little bit about FileMaker and its history.

FileMaker is a wholly-owned Apple subsidiary (you know, the iPhone company). Hoovers estimates FileMaker’s gross revenue to be about $106 million. This makes FileMaker a minuscule component of Apple’s $230 billion dollar revenue empire.

FileMaker was purchased by Apple’s software subsidiary, Claris, somewhere around 1988. It was originally designed to be a personal relational database. If you don’t understand the nature of “relational” databases, think of it this way. If you have twenty friends who all work for the same company, do you really want to enter their company information into your address book twenty times? Wouldn’t it be much better to reference this company info into their personal record from one record of that company? In addition to saving you a lot of typing, if you changed the company phone number, referencing the information into other records immediately updates all of those friend records.

In the late ‘80s, most relational databases were expensive and required complex coding. They were therefore difficult for non-technical people to use. FileMaker, by contrast, was inexpensive and very “visual”. It was extremely easy to use. In FileMaker, users created “Excel-like” tables of information (People, Companies, Invoices, etc), then connected the tables together using a visual Relationship Manager. The Relationship Manager was a visual representation of all tables. Users formed relationships by simply “drawing” connecting lines between the table “keys”. In our friend example, you would simply drag a line from each of your friend’s record “key” to the company record key, and voila, one company record is referenced into all those friend records. Input screens and reports were also easy to build. They could be simply designed by dragging fields around using a visual interface composer. The application was extremely elegant and robust.

Jump ahead 18 years and FileMaker is today a jewel of a product. In addition to all the original benefits, it now has a rich scripting language capable of turning your databases into “applications”. These applications work like customs software, capable of driving whole companies. Additionally, FileMaker clients can connect to remote cloud servers. This allows individual clients to communicate with central databases that scale virtually to any size required.

Apple’s DNA is visible in both the FileMaker product and the FileMaker organization. It’s no secret that Steve Jobs didn’t want anything to do with the enterprise market. He saw Apple as the “Sony” of the computer industry. That is to say, a “high-end”, consumer products company populated with high-quality, boutique products. The iPod, the iPhone, the iPad, and even iMacs and MacBooks are evidence of this philosophy. The enterprise market belonged to the low-end, “sausage factories” like Dell.

FileMaker benefits from Apple’s penchant for elegance and the spirit of individuality. It feels like a “personal” program. Its popularity springs from ambitious individuals identifying departmental organizational issues, then taking it upon themselves to formulate elegant automated solutions. Many of these individuals, then break away from their companies to form small “consulting” businesses that develop solutions for schools, churches, and other small businesses.

Filemaker’s developer following is small but very devout. They remind me of the “cult of Macintosh” days when Mac users were on a religious crusade to save the platform from the “evil PC empire”. They know they have a better solution and they never miss an opportunity to let you know about it. The Developer Conference is a gathering of the faithful. This year, thousands converged on the Cosmopolitan Resort in Las Vegas to attend educational secessions, share stories, network with other developers, and hear about the future roadmap of the platform.

The DevCon Keynote was delivered by FileMaker’s President, Dominique Goupil, and other high-ranking officers. Thousands of developers packed into the 40,000 sq. ft. Chelsea auditorium to hear the team outline future features in broad strokes. They asked everyone present not to reveal these announcements, and I’ll respect that request here. Suffice it to say, FileMaker is poised to seriously challenge enterprise application solutions. The scene was “Apple-esk”, complete with an impressive audio-visual extravaganza. Afterward, all present attended an after-party food and drink fest, complete with mucho giant shrimp and top-shelf liquor.

The oddness stems from this particular moment in the product’s history. FileMaker is poised to “break out” of its image as a personal application development tool targeted at corporate workgroups and “Mom and Pop” shops. FileMaker could seriously challenge the enterprise market if only it could get some love from its parent company. FileMaker is an incredible product, and it has an enthusiastic developer base. But without a broader user base, it’s in danger of languishing. Why for instance, doesn’t Apple distribute a “lite” version of FileMaker with every Mac? The Lite version could be a single user, but require a paid license to connect to the cloud and other clients.

Apple’s track record with pro and enterprise products is not good. Consider Final Cut Pro, Motion, Logic, macOS Server, as well as the MacPro, and the Mac 1U Server. Apple just doesn’t seem to want to commit to the enterprise market and it’s a shame. It’s not that they can’t do it, it’s a strategic marketing and branding decision.

Tim, if you’re listening, scrape together all your pro and enterprise software and hardware products, and form a new enterprise-targeting company. Call me simple-minded, but I think it’s a lot larger opportunity than the new Apple Watchbands.