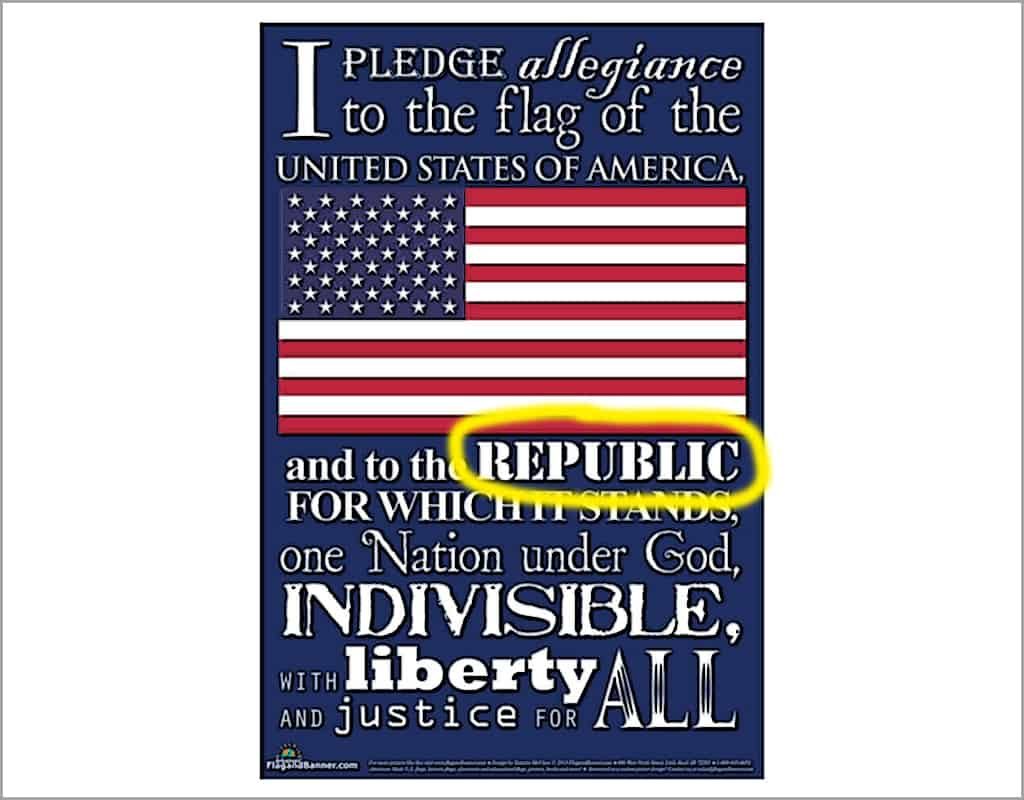 Every now and then I’ll catch a public figure make a proclamation that is so erroneous, I have to wonder: “Is this person evil or stupid? If the person in question really doesn’t understand that he/she is making a mistake, then he/she is simply stupid, moronic, slow, ignorant, or obtuse. I can accept this. I understand that a great many people in this world are boneheaded jackasses and that’s fine. The simple-minded are, for the most part, irrelevant to my situation and therefore, harmless.

If on the other hand, however, a public figure makes a proclamation with the full knowledge that what he/she is saying is false, or not as true as it could be, that person is evil. Evil may sound like a strong word, but I assure you it’s not. If a person intentionally tries to mislead another, that is a lie, and intentionally lying is evil.

So why then do so many politicians and news reporters – people that should know better, refer to the United States as a Democracy? In a strictly technical sense, the United States is a Democracy. But only because the word Democracy is so vague. To characterize the U.S. as a Democracy is like calling a whiskey a beverage, a Fararri a car, or whale an animal – it’s technically true, but it grossly neglects the majority of the subject’s essence. For instance, a lynch mob, or a tar and feather crew, are also democracies. Majority rule is not necessarily just, fair, or moral. Americans should distance themselves from that brand of Democracy.

Specifically, the United States is a Constitutional Republic. As defined by Wikipedia …

“A Constitutional Republic is a state where the head of state and other officials are elected as representatives of the people, but must govern according to existing constitutional law that limits the government’s power over citizens.”

Calling the United States a Democracy grossly understates the elegance and civility of our beautiful form of government. It leads both our citizens and those citizens of other nations to believe that majority rule is all that’s necessary to become a great and just nation.

Government Grounded by the Rule of Law

The beauty of a Constitutional Republic – the central element that makes this form of government so much better than most other forms of Democracy is the concept of “the rule of law.” Wikipedia defines “the rule of law” as “a general legal maxim according to which decisions should be made by applying known principles or laws, without the intervention of discretion in their application.” With regard to the United States, our highest “rule of law” is our Constitution, hence the term “Constitutional” Republic. Our democratically elected, public officials are not free to do as they wish. They must first and foremost enforce “the rule of law” embodied in our Constitution. In fact, the President swears to this at his inauguration. This is a principle that every government studies 101 student, every news reporter, and every politician should be aware of.

The Motive for Confusion

Power grabbers have always understood the stupidity of the masses. Thinking men and women understand that the government has nothing to give save what it steals from others. Every “gift” from the government must be pilfered from a producer. The only way to create wealth is through hard work and risk taking. Unfortunately, as Henry Ford said: “Thinking is the hardest work there is, which is the probable reason why so few engage in it.”

The more that those in power can convince us of the virtues of Democracy, and thereby diminish the understanding of a Constitutional Republic, the easier it will be to accumulate power by going directly to the unthinking masses. Majority rule democracies don’t last very long. In a short time, the majority learns that they can enrich themselves by stealing from the minority. Only the “rule of law” in a Constitutional Republic prevents this from happing.

What You Can Do

Whenever you hear someone referring to the United States as a “Democracy,” it’s your patriotic duty to correct them by saying: “Yes that’s true, but, more correctly, the United States is a Constitutional Republic.” Or, if you’re like me, … simply say: “It’s a Republic, Stupid!”