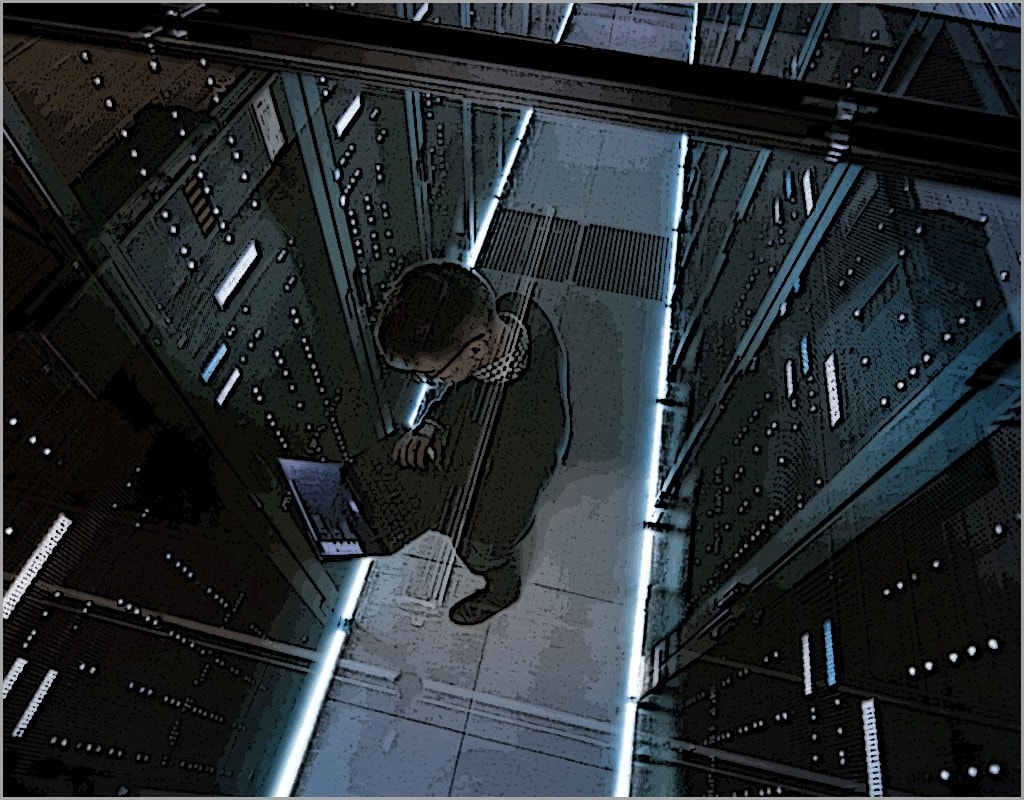 Most of the hassle when collaborating with other information workers is encountered getting through firewalls. Most companies are so paranoid about security, that sharing files or collaborating between individuals using different file servers, between offices in remote locations, or even between completely separate companies can be a real challenge. It usually requires a virtual private network (VPN) or Secure Socket Layer (SSL). For most people, both usually require IT expertise to set up and maintain.

The beauty of “Back End Services” like Dropbox, Google Docs, Apple iCloud, or even Facebook is that once logged in, everyone’s data and sometimes even applications are on the same side of the firewall. Individuals from anywhere can freely share information or even collaborate on the same documents. Regarding Facebook, my contention is that the real value for most people (especially families) has always been the ease of sharing information. Even the technically challenged can easily network and share. It’s like everyone with a Facebook account is on the same corporate network.

Recognizing this trend, Apple created iCloud. I am presently writing this blog on a wonderful little software program called iA Writer. At the time of this writing, iA Writer costs about $4.99. It’s the first program I’ve ever regularly used that takes full advantage of Apple’s iCloud back end service. The second you open a document, it’s saved, even without naming it (it’s simply called untitled). When you name a file, a dialogue box gives you the choice to save locally or to save to iCloud. If you choose the iCloud option, the document is immediately available on every Apple device with iA Writer installed. For instance, if I get an idea for a blog and I’m at the movies, I simply open iA Writer on my iPhone and type the idea in a new iA document, then save to iCloud. When I get on my desktop Mac at home, or my laptop at work, or my iPad in my living room, as soon as I open iA Writer, there’s my idea. The networking is automatic. Wow! What a revelation!

Keep in mind that I knew about iCloud long before there ever was a working iCloud. I’m a tech junkie. But using iCloud aware applications is a totally different experience than hypostatizing about them. iA Writer and many other iCloud aware programs are changing my life, by changing the way I work.

Incidentally, all applications on Apple’s iPhone and iPad work this same way. There’s no need to save locally, nor do you want to. When you save a document on an iPad, it saves to iCloud and is immediately available to all other Apple devices.

When at the office, even though we have a corporate network, I still find Dropbox even more convenient than using our conventional network servers. If you haven’t used it, Dropbox is wonderful. Once you install the free Dropbox application, a Dropbox folder appears on the root level of your local file system. Anything you put into that folder is automatically synced via the internet with an identical folder on the Dropbox servers. Here’s the beauty, you can share that folder or any subfolder with any other Dropbox user. You can even set up subfolders to sync with specific groups of people. When you put a file in a shared folder or update a file in a shared folder, it is automatically added or updated in any subscribers folder in seconds — amazing! What’s really cool is that even though your technically networking, you’re still working “locally”. In other words, even programs that require fast access to files, like cad or desktop publishing still work flawlessly. At work, we’ve taken to using Dropbox to facilitate a collaborative workflow on all our company documents.

This impact of “back end services” has led me to another revelation: in the near future, the hardware is not going to matter, the future value of computer hardware and computer software companies will shortly lie in the value of a company’s “back end services.” Nothing demonstrates this better than mobile devices like smartphones. Smartphones are perpetually connected to the internet. This allows them to easily serve as “thin clients,” saving files or offloading processing chores to “back end” servers if necessary. Consider Apples Siri. Siri doesn’t really live on your iPhone. When you speak, your voice is instantly transmitted to a supercomputer somewhere where your voice is digitized, converted into text, and analyzed for content and context. If for example, you use the words schedule, meeting, and tomorrow in the same sentence, Siri knows your talking about a meeting sometime in the next calendar day. Back end supercomputers supply the artificial intelligence necessary to process commands in seconds. It works and It’s truly amazing.

With so much processing and storage power in the back end, front end equipment will be reduced to sensors and radios. Within two years every cellphone will look exactly like the iPhone. That is to say, every cellphone will simply be a glass touchscreen front covering a group of sensors, recorders, and transmitters. Cellphones will be “thin clients” to “back end services.”

What does this mean? Within two years the price of “smartphones” will plummet due partially to declining manufacturing costs and economies of scale, but mostly because the hardware itself has already reached a threshold where any additional features yield diminishing returns. Smartphones are good enough and customers will be remiss to pay more for minuscule hardware improvements. What will improve and what customers will pay more for are fast network connections and better, more robust, “back end services.”

The other causality of this trend will be cellphone insurers as the devices will be so cheap, they won’t be worth ensuring. Companies like Asurion, that cover handsets from the tier one carriers will find rough going trying to convince customers that a $100 handset (with all the features of the current iPhone) is worth insuring. They also must add some other value to their offerings or die.

Bob (Cringley) is right on regarding “Steve Ballmer’s Dilemma.” Microsoft, in its present form, has 2-3 years left. But I disagree that they couldn’t turn things around with a little imagination supplied by a new “Steve Jobs like” CEO.

First, they need to trim away everything that’s not a “cash cow” and grow their cash hoard. This includes any further Windows development. The desktop is dead. Microsoft’s (Balmer’s) biggest obstacle to future growth is their vision of the future. They need to forget about dominating the desktop and forget about dominating corporate applications (Office and Exchange). These products are dead ends. The era of ever-expanding applications is over. The notion of adding dozens of useless new features every year to drive sales is over. In fact, just the opposite seems to be happening – applications are getting smaller, specialized, and compact. With regard to dominating the desktop, there isn’t going to be a desktop to dominate as smartphones, tablets, and other personal devices connected directly to the internet become ubiquitous.

The new desktop is “back end services” like Dropbox, Gmail, Facebook, Smugmug, and iCloud. Microsoft needs to focus all its energy on creating a suite of “back end services” connected to end users via smartphone, tablet, and yes maybe even desktop “Apps”. This doesn’t mean simply “porting” MS Office to apps. It means imagining a completely new future scenario where small, tight little applications all converge for purposes of collaboration in the “back end” – on Microsoft servers.

Corporate IT departments are dead. The workforce is becoming too decentralized for traditional IT networks to facilitate the collaboration necessary to be competitive in our increasingly mobile and “outsourced” society. The “firewall” has been moved out to include everyone in your social/business network. Facebook demonstrated the viability of this concept in the consumer space, Microsoft could do the same for businesses.

PrevPreviousWhat About Cheech?
NextRevenge of the Peter PrincipleNext
More Blogs