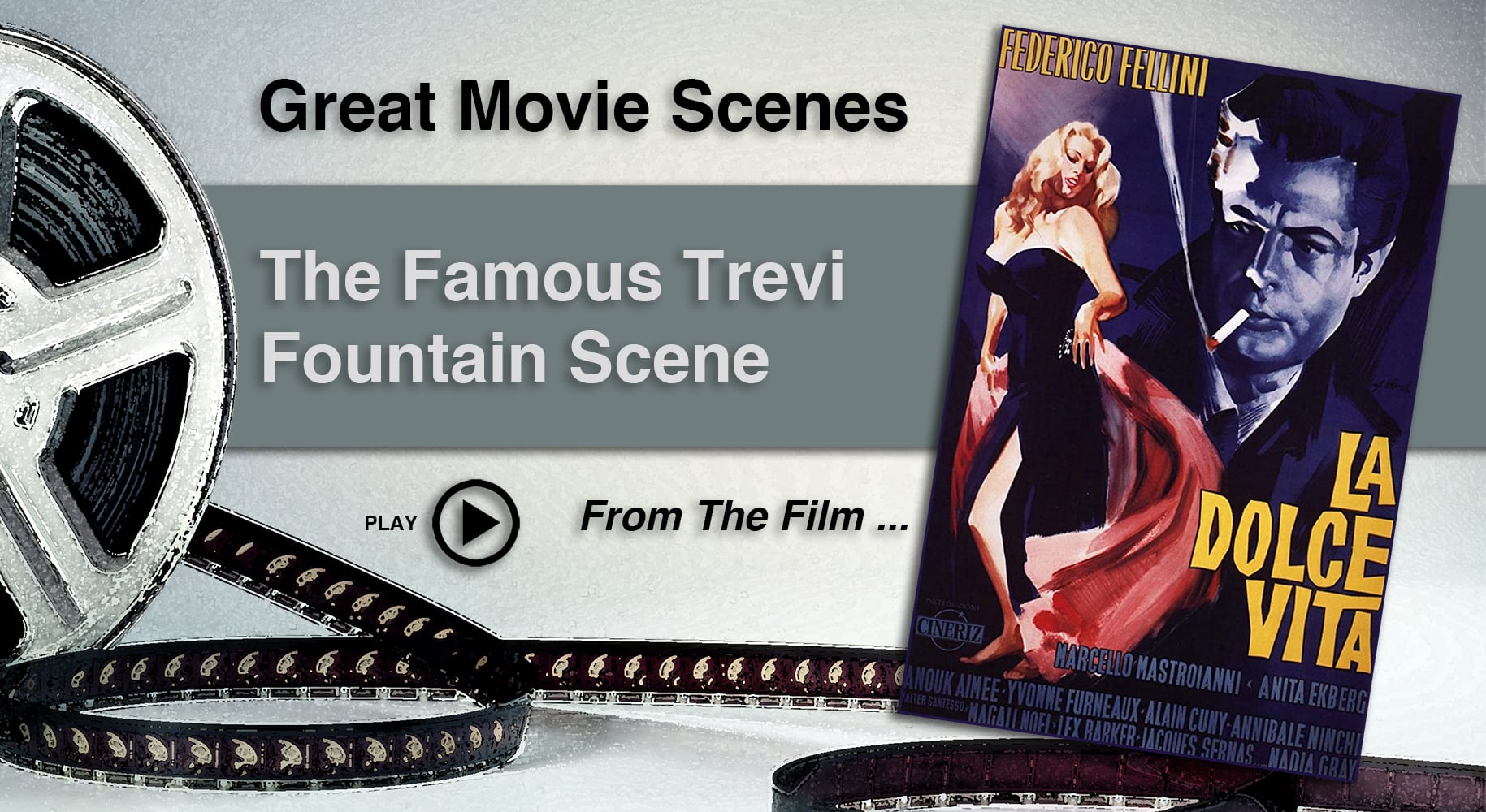 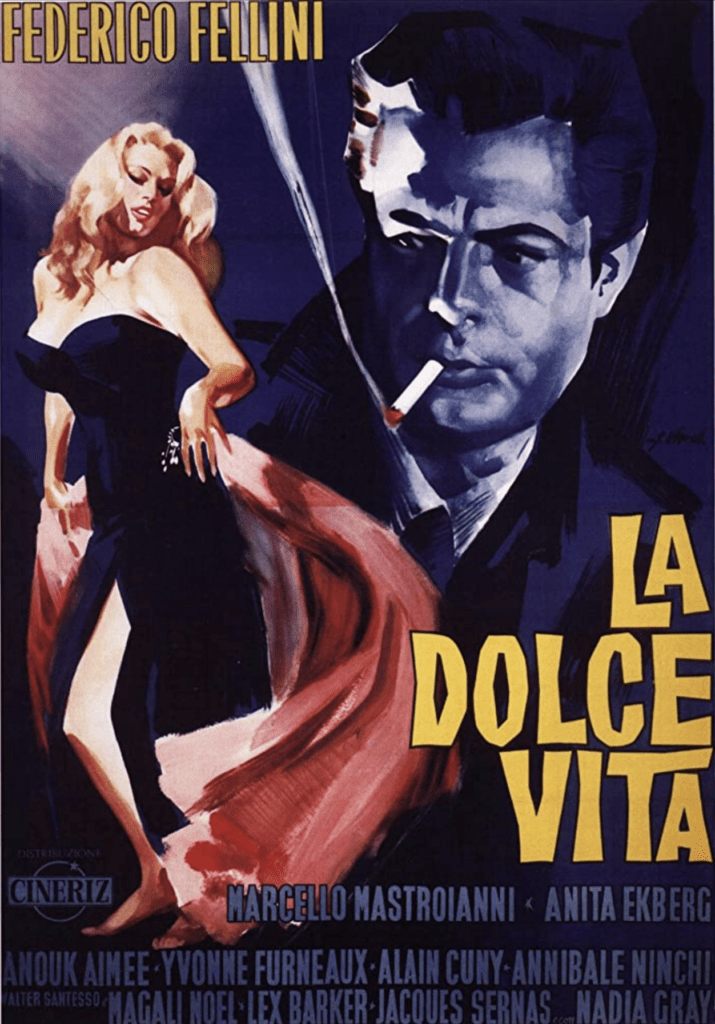 La Dolce Vita is a movie about a young men’s desperate search for fulfillment. It’s a man’s movie and I have never met a woman that really identified with it. La Dolce Vita translated means “The Sweet Life”. But after watching the movie, you’ll realize it’s more a question than a statement.

The movie’s main character is Marcello Rubini, played by Marcello Mastroianni. Marcello works for a tabloid magazine. His nights are spent roaming the Roman Via Veneto – the famous street of swank night clubs, outdoor cafés and fine dining restaurants. He stocks the rich and famous, always looking for gossip to print. He spends his life with the “beautiful” people – the “in” crowd in “hip” places, yet he is consumed by chronic dissatisfaction. He aspires to move on – to serious journalism and a serious relationship, but he’s just not ready to leave his current lifestyle.

La Dolce Vita is Federico Fellini’s masterpiece. It’s a series of vignettes, each watches like an episode of Marcello’s disappointing life. The most famous of these is “Sylvia”, played by Anita Ekberg. Sylvia is ostensibly a famous American movie star coming to Rome to make a picture. Marcello is covering Sylvia’s arrival for his magazine. At first he indifferently treats the event like so many other frantic publicity stunts he’s covered. But gradually, he becomes enamored with Sylvia. He becomes infatuated by her coquettishness.

Sylvia symbolizes an idealized man fantasy. She is beautiful, playful, and very sexy. Every man fawns over her, each trying to out do the other to win her favor. She is so used to getting what she wants, that she moves through social settings like a child in a playroom.

Interestingly, her boyfriend, Robert, is a crude, boorish, drunken bad boy played expertly by Lex Barker. He’s not impressed by Sylvia or her friends and slaps her around when she gets “out of hand”. At a party, the night of her arrival, he publicly offends her and she storms out. Marcello sees an “opening” and whisks her away in his MG convertible.

What follows is a late nite chase – Marcello desperately tries to find a place to take Sylvia. He can’t take her home because he has a girlfriend, he can’t take her to a hotel because she’s famous, all his friends are out of town or busy. What is he to do? Meanwhile, Sylvia plays Marcello like a puppet on a string. The evening culminates with the famous Trevi Fountain scene.

To me a great scene encapsulates a moment in life that we can intimately identify with. It reminds us of a truth or teaches a lesson.

Every young man has had a night like this. A beautiful woman seduces him so completely that he loses all sense of proportion. He must have her, no matter the cost. She is tantalizingly close. He knows he’s making a mistake, but he can’t help himself. It’s a tragedy that has to be played out.

The scene climaxes as Sylvia seduces Marcello into the cold fountain, tuxedo and all. The moment is right, the water is flowing, he embraces her and prepares for a kiss. He then whispers the words: “Sylvia, who are you?” Like a playful child, she reaches into the fountain for a hand full of water and sprinkles it over his head. She is life itself.

Then in an instant, it’s over. The moment is gone. The water stops flowing, and the dawn breaks. The spell is broken. A delivery boy looks on from the street. The night and their romance is over. What once seemed romantic, now seems silly in the light of day. Marcello leads Sylvia out of the fountain and returns her to her hotel.

Back at the hotel, the woman that seemed so powerful, now appears pathetic as she endures abuse from her “boyfriend” and runs like a crying child into her hotel.