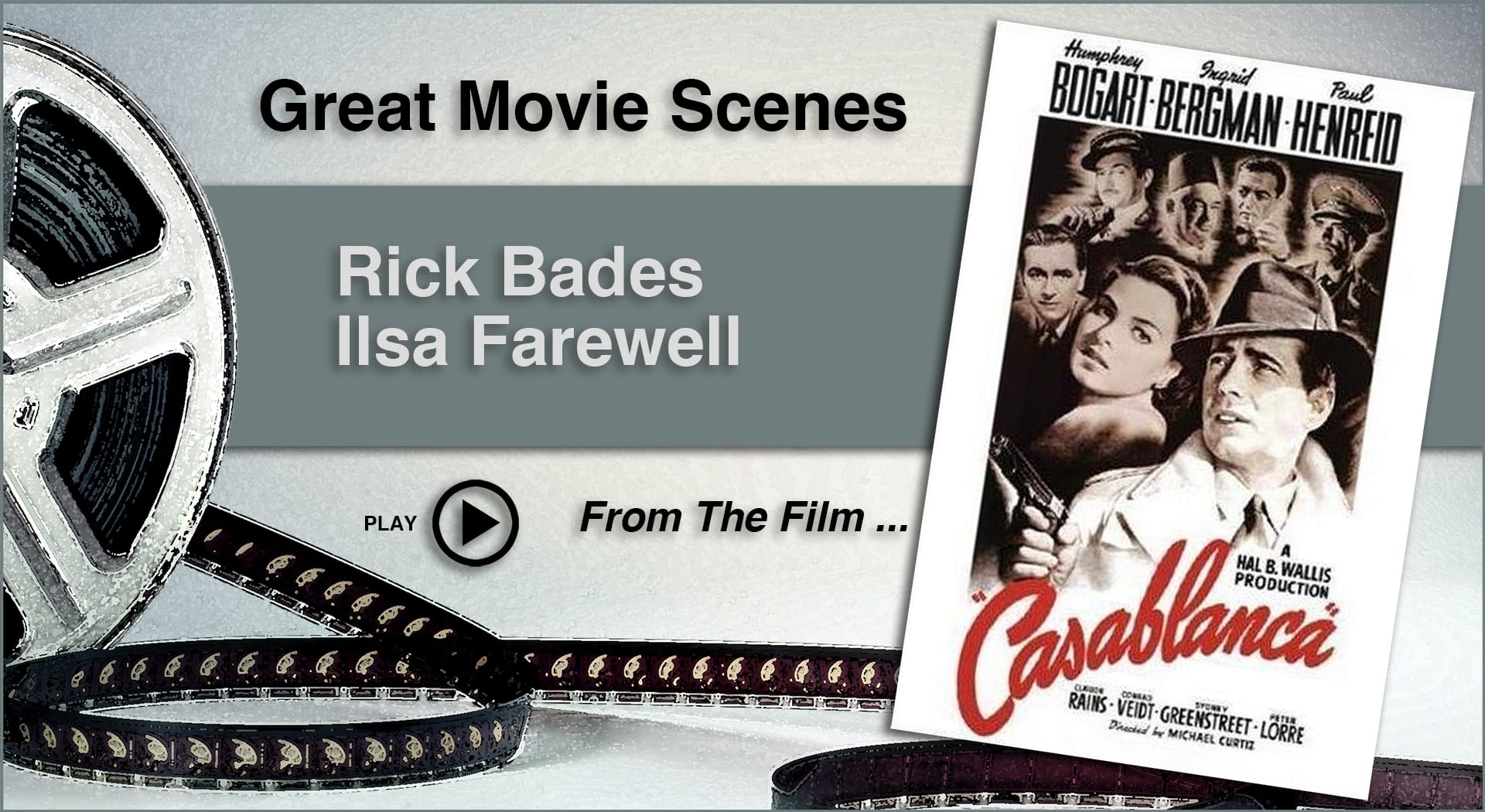 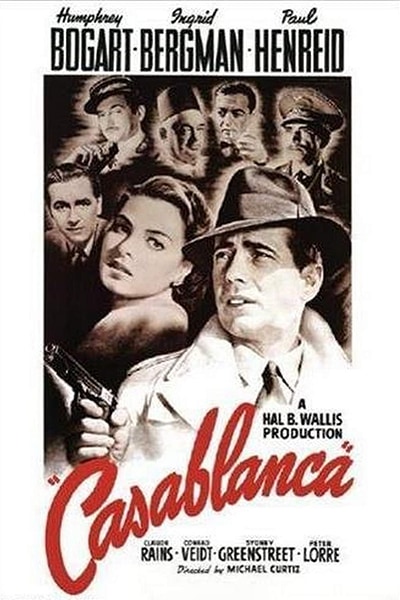 Critics routinely score Casablanca in the top five best movies of all time. Considering the volume of movies made since 1942, this is high praise. For me, it’s number one. Casablanca has everything I want in a movie – a great story, brilliant acting, beautiful cinematography, great dialogue, engaging effects, and a noble theme. But what really puts it over the top for me is that Casablanca was made in about 70 days for a minuscule budget of slightly over one million dollars1, yet it watches as good today as it did when it was made. It’s timeless, and that’s the true test of great art.

Casablanca is the story of a man’s redemption. What was once lost, is now found, and we’re all better off for it. The man’s name is Rick Blane played memorably by Humphrey Bogart.

When we first meet Rick, we learn he’s an American expatriate living in Casablanca, French Morocco. The Prefect Captain Louis Renault, played by Claude Rains, suggest Rick may be running from the law, but the reason for Rick’s situation are never really made clear. One thing is clear, Rick seems to be motivated exclusively by self-interest. Outwardly, he’s a clear thinking pragmatist and cynic. He “sticks his neck out for no man.”

Year the year is 1942, WWII is in full swing, Nazi’s have occupied most of Europe and are making advances in North Africa. At the moment, Casablanca is still a neutral city, but Nazi influence is escalating. Many europeans desperate to leave the continent travel to Casablanca, using it as a “jumping off” point to the United States or other neutral nations.

Rick owns a popular nightclub called the Café Americana. The club is a hive for underground activity – those seeking illicit passage, or nefarious access to exit visas authorizing them to leave French Morocco. Rick is unconcerned with this activity as long as it doesn’t interfere with business.

Everything is going well for Rick, his club is popular, he’s making money, women want him, and he has a cozy relationship with Captain Renault. Then in an instant, circumstances conspire to change his life forever. A conflict arises that forces Rick to make a hard choice that defines his character.

Act two begins as an infuriated Rick hears Sam the piano player, played by Dooley Wilson, playing a forbidden song. Rick quickly discovers the request was made by a new arrival, Ilsa Lund, played by Ingrid Bergman. It is later revealed that a year previous, Rick and Ilsa were romantically involved in Paris just as the Nazi’s were marching in. Rick fell in love with Ilsa and proposed the two marry and travel south to wait out the war. Ilsa accepts and the two agree to meet later at the train station. But as the train is about to leave the station, Rick receives a note from Ilsa stating she loves him, but cannot be with him for reasons that are unclear. Rick is crushed.

Presently, Ilsa is married to a famous French resistance fighter, Victor Laszlo, played by Paul Henreid. To everyone’s surprise, Victor Laszlo is a man that Rick greatly respects and admires. This makes Rick’s reception of the couple complicated.

Ilsa and Victor are desperately trying to get to America to escape the Nazis and raise support for the French resistance. But there’s a problem – they don’t have exit visas and the German liaison officers are pressuring Captain Renault to deny them. Without exit visas, Victor and Ilsa are trapped in Casablanca indefinitely.

Coincidentally, Rick came into position of two “letters of transit” when a customer asked him to hold them for safe keeping that very night. Later, the customer was shot while trying to escape the police. No one knows Rick has letters for sure, but the word on the street is that they are in his possession.

When the Prefect denies visas to Ilsa and Victor, Ilsa turns to Rick for help. She comes to him in the night and begs him for the papers that will save her husband. She reveals to him that she was secretly married to Victor when she was young. When she met Rick in Paris, she was convinced Victor had died in a Nazi concentration camp. On the eve of their train departure, she discover that Victor was alive and severely sick. She was duty bound to go to him and leave Rick at the station. As the scene climaxes, Ilsa states she still loves Rick and will stay with him if he lets her husband use the exit visa to escape Casablanca.

Rick is holding all the cards. He has the exit visas, and now he has the girl. Ilsa’s prostrate solicitation is sweet revenge for pain he suffered over the past year. To make matters even tidier, the Nazis pressure Captain Renault to arrest Victor on a minor charge and hold him indefinitely. Rick has won.

But something is not right. Rick knows the Nazis are evil. He also knows Victor is an honorable man and his work is courageous, noble, and essential. Whatever Ilsa’s present feelings, she is Victor’s wife and he needs her. As the movie climaxes, no one knows how it will all play out.

Rick Blain is a monumental character in cinema. You would never have a character like Han Solo of Star Wars fame without Rick. Rick represents the modern genesis of a mythological character archetype called the mercenary antihero. Outwardly, Rick appears cynical and pragmatic. As a young man, he was an idealist and romantic. But he’s been hurt and disappointed so many times, he’s built an emotional shield around him to prevent future pain. His hard-boiled exterior is a defense mechanism hiding a romantic, and an idealist. When forced to make a decision however, he has no choice. He secretly doesn’t want to live in a world without love or honor.

As is common with this archetype, we like Rick inspire of his cynicism and we can’t quite figure out why. On closer inspection, we like him because his actions don’t match his rhetoric. There are many clues that reveal his secret. His employees love him. Captain Renault, the unscrupulous club rake, admires him for his discipline and restraint. He frequently despises the unprincipled and and the amoral. But the biggest tell is the assistance he extends the young couple seeking passage to America. He secretly allows the husband to win their passage at the roulette table, thereby allowing the woman to keep her virtue and the husband to keep his dignity.

In a way, Rick Blain is a symbol for all men. Every man, at some point in his life must make a choice between pragmatism and principle. Do we sell our soul and take the easy road, or do we sacrifice short term gain for something better – a greater good. Eventually, every man must decide which world he wants to live in.